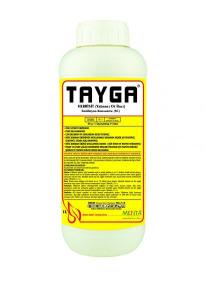 Feature :   It is a selective herbicide used after emergence in the control against single and perennial narrow leaf weeds.

Antidote : It has no special antidote. It is treated according to the symptoms.

PREPERATION OF THE PESTICIDE FOR APPLICATION

The plant protection product calculated over the recommended dosage is first mixed with some water in a separate container. The tank of the application machine is half filled with water. Medicated water is added to the tank while the mixer of the machine is running. The mixing is continued and the tank is completed with water. Mixing is continued until the application is completed. The amount of water to be used per decare should be 20-40 liters, and fan jet nozzle should be used in applications. Use the prepared plant protection product on the same day.

The plant protection product TAYGA is a herbicide classified as Group A:1 according to its mechanism of action.

For this reason, in order to delay the development of resistance, do not exceed the total number of applications

recommended in the same season of TAYGA.  In cases where the application should be repeated, pay attention

to the use of plant protection products with different action mechanisms (other than Group A:1). Always follow the recommendations on the label.